It’s a ten hour drive from Portland to the summit of Steens Mountain, in remote Harney County in Oregon’s sparsely settled southeast corner.  At almost 10,000 feet in elevation, Steens Mountain is the third highest peak in the State.  But even in the last hour of the drive to the summit, passing through groves of aspen on a gently sloping mountain shoulder, little prepares you for the nearly vertical scarp that forms the crest of the mountain, dropping almost 4000 feet to the Alvord Desert below.

And little prepares you for the evening sky that follows the long day’s drive.  With the nearest population center (Burns) some sixty miles away, the Steens Mountain Wilderness boasts one of the darkest night skies of any location in North America.  Against this background, the nighttime display of stars is electric.    As the last traces of twilight fade from the late August sky, the Milky Way appears like a flying buttress against the intense dark blue- a sparkling crown spanning the entire north-south axis of the entire summit ridge.

Capturing this light show in a digital camera is technically challenging.  There are a number of great tutorial videos on YouTube to help, including Introduction to Milky Way Photography (https://www.youtube.com/watch?v=IzBiWCPLw4A).  I won’t try to share the details here, but just summarize the key ingredients that went into the end result:  several weeks of preparation, followed by about three hours of night photography on Steens, from which about twelve individual images were selected and then stitched together in Photoshop to make the final panorama.   The dramatic result covered the entire 180 degree span of the Milky Way.

I would add one strong recommendation about staying safe during night photography.  The same dark, moonless sky that produced the dramatic background also created nearly total blackout conditions on the ground.  Familiar objects in daylight, like trail markers, simply vanish, even after your eyes become accustomed to the darkness.  These conditions would be dangerous enough in your own backyard, but working just feet away from a cliff, one false step could easily be the last.   I wound up sticking to a routine, planting my feet behind my tripod and not moving until a series of exposures were finished.  I didn’t lift my feet until I turned on a red-color night vision headlamp to orient myself.

Every time I visit Steens Mountain, I get the feeling I’ve come to the edge of the earth.  This time, out to capture the Milky Way, it felt like I’d gone considerably further.   From earth to the center of the Milky Way (that bright cloud at the lower right hand of the arc) is 26,000 light years. 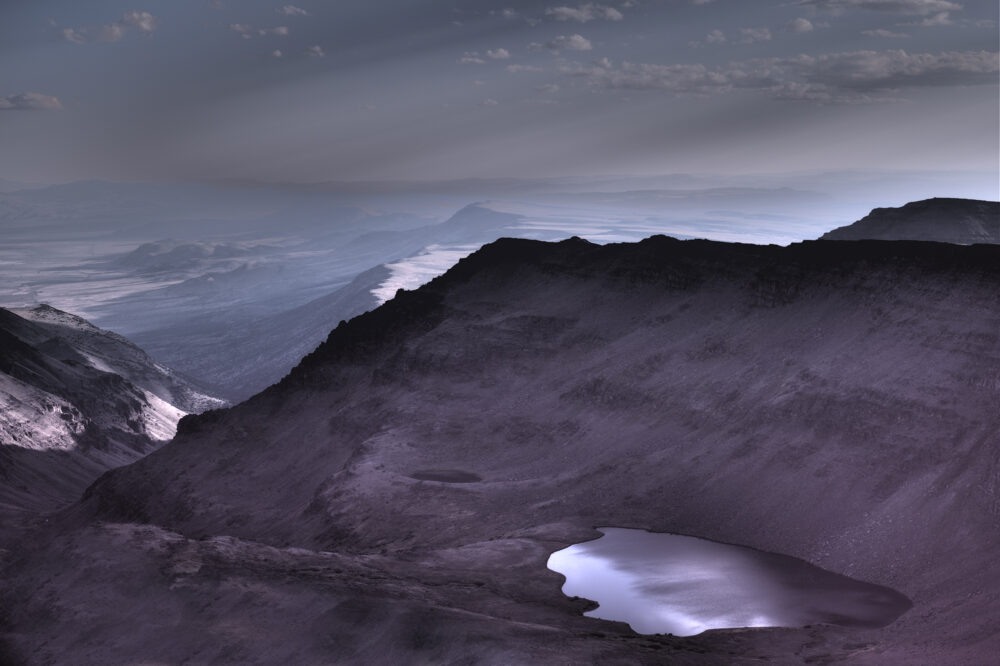